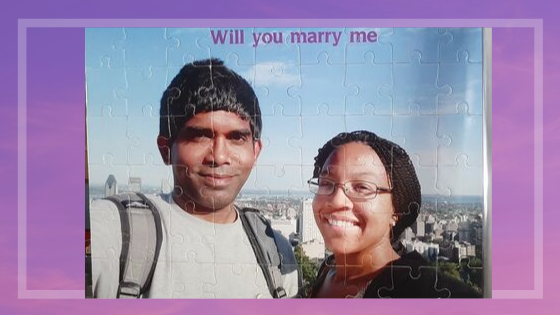 By Megan and Ganesh

This is a collaboration with my main man, my best friend, my husband. I’ve included my internal thoughts, because I know you guys want to know exactly what I’m thinking (At least I hope you do.)

Ganesh: Our proposal started Sunday May 4, 2014. I surprised Megan and took her back to where we had our 1stdate on August 22, 2012 at Rosemary and Thyme’s Bistro. We sat outside like we did on our first date and reminisced on what we had talked about while enjoying a great brunch.

After, we walked around the neighborhood and went to the coffee and dessert place that we went to on our 2nddate at Tryst. We had some drinks and shared a dessert before going home. That evening I gave Megan the board game Qwirkle and we played a game before bed.

Megan’s Inner Monologue: When Ganesh told me, we were going somewhere special I told to myself this is it, I’m (We’re) getting engaged. I put on a nice dress that I wore on our first date (I didn’t know where we were going) and did my hair. On our way he stops off at Riggs Place (My family name) We walked on and he has me close my eyes. (Which is super scary when you can hear cars but can’t see them, traffic signals or curbs.)

Holding hands he leads me around until we get to the place and he has me open my eyes. I am very surprised and happy and now I really think this is it! We go in and sit outside and people watch and eat. He says he has somewhere else he wants to take me.  After we are done we decide to walk around a bit first and then he takes me to the dessert place. I think to myself what can go better together than dessert, a drink and a ring!!

At the end there is no ring and we go back home and go grocery shopping. That night when he says he has something for me I wonder if it is the ring. (Spoiler Alert, it’s not) He gives me Qwirkle which I fell in love with on our last trip to New York and had played with him and his niece. When I go to bed without a ring, I say to myself I don’t believe it. I didn’t think he would be able to not give me the ring as soon as he had it because he isn’t good at keeping secrets, but now he is!

Ganesh: On May 11, 2014 we had Megan’s mom over and cooked brunch for Mother’s Day, which was a bunch of fun. Then I surprised Megan and took her out to the Zoo which is where we went to on our 3rddate.

After we walked around we went to a little bar that we went to on our original 3rddate and had $1 Margaritas. That evening I gave Megan another board game, Sequence and we played a game before bed.

Megan’s Inner Monologue: After my mom left we did some work and then we go out and get on the train and I guess that we are going to the zoo but when we don’t get off at the station we normally do when we go to the Zoo, I think oh maybe not. (I’m on to him. For Valentines’ day I had given him a scrapbook that had our first seven dates in it, so I’m on to his plan. Plus I had told him to make a good story for us since everyone always asks “And how did he propose”)

We get off at another stop and walk around and then we start to walk up and I realize we are still going to the Zoo and he was just trying to trick me! Maybe this is it I think. We walk around and visit some exhibits we hadn’t seen before like the Reptile house and seeing the baby panda! After we are done we leave and walk back the way we came.

We stop at the same restaurant we did on our 3rddate and have two $1 Margaritas each and then head home. After we get back and shop (Groceries again), he gives me Sequence, the only game I won in New York! Still no ring, he is being so strong at not giving me this ring, I wonder who will crack first me or him.

Ganesh: On May 18, 2014 I took Megan down to the Georgetown waterfront area and we walked to Serendipity 3 for a frozen Oreo® hot chocolate. We had tried to go there on New Year’s Eve but they were closing early. After we finished the hot chocolate we walked to Dumbarton Gardens where we went on our 4thdate.

We walked around, talked and had fun. Then we went home and had our 5thdate where I cooked for Megan at my place for the first time. I made my famous fried rice and Sri Lankan fried shrimp and set the table and lit candles. After we were done I gave Megan a puzzle. It was magnetic so she could put it up on the fridge.

I tried to help Megan do the puzzle so that we could get it finished in time. Because I had hid a few pieces. When Megan realized it, I told her that maybe they fell out of the box and went to check. I ‘found’ them and gave them to her to put in. As she put in the last pieces when she got to the third piece she saw that there was writing on them and that I was asking Megan to marry me.

I got down on my knees and said how I felt and how much I love her while I placed the ring on her finger and asked her to marry me. She said yes. Then I told her that I was taping it on my phone so that we could show our kids! (We also played a jazzed up version of it during our reception.)

Megan’s Inner Monologue: This was the craziest of our date revisits, Ganesh makes us breakfast and lunch and then we go out to get on the bus. I know we are going to the Georgetown waterfront because we always take the bus there. Ganesh decides to take me to have dessert after lunch at Georgetown Cupcakes before we go to do what he had planned which I was guessing was Dumbarton Gardens.

The line is crazy long and I don’t want to stand in it, but we get in and then after a couple of minutes Ganesh decides that maybe we should just leave. But then I’m like we have been standing here this long, that if we leave now, we have wasted our time. But he says he is worried that we might not have time to do the other stuff he had planned so we leave. This is when I should have known that it was going to happen because we aren’t usually on a time schedule but I didn’t think about it then.

We have a fight because I was cranky about waiting in the long line and then not getting cupcakes. (who wouldn’t be, those cupcakes are delicious!) We take a 5-minute cool down break and then we come back together and I tell him this isn’t how I want this date to go and we make up as we communicate what we both got frustrated about. (Don’t want you to think we’re perfect. No one ever shows what happens after a Happily Ever After or HEA) I ask Ganesh if he still loves me when I’m bitchy and will he still love when I get pregnant and my hormones are going crazy and he says yeah.

He takes me to Serendipity 3 and we share a frozen hot chocolate for two and then go for a walk to Dumbarton Gardens. We have a wonderful time walking around to places we had been before and exploring before we take the bus back. Ganesh cooks and says he wants it to be just like our real 5thdate so if I could please keep my regular clothes on (Full disclosure when I get home I always take my shoes off and then my pants and put on a lounge outfit because I’m home and I want to be comfortable!)

Again I should have known something was up but I just thought he really wanted to recreate our 5thdate and I was having so much fun reliving our dates, I almost didn’t want it to end. So I wasn’t thinking that this was it. I wasn’t sure if he was going to repeat all the dates that I had put in the scrapbook that I had given him for Valentine’s Day and we had two more dates in the book left.

He sets the table nicely and gets out nice glasses to drink from and lights some candles. We eat and after we are done he says he has a small surprise for me but that I have to close my eyes. I go in the bathroom and tell him to just tell me when I can come out. (We lived in a studio at the time so that was the only hiding spot or going outside, lol) I think he has forgotten about me so I call out but he says he is almost done. (Remember studio, so he had to find some place to hide it where I wouldn’t find it.)

After he says I can come out he gives me the puzzle. I start putting it together and he wants to help me, but I want to do it on my own because I love puzzles. I start it up on the fridge and he finally lets me do it. (I didn’t know then that he had checked with his mom for the auspicious time to propose and was trying to get everything done during the time window.) (In case you’re wondering, we made it in time.)

I am at the end and doing the sky which is tricky when I realize we are missing some pieces and the box is empty. I feel really bad that Ganesh got this cool magnetic puzzle with a picture of us from Montreal and then pieces are missing. He says he’s going to go look for them so I go and hide again. (Because hey, it’s fun.)

He says that they had fallen out and brings them over. It is only four pieces. I am putting them in when I get to the 3rdpiece. I realized what is going on and that there is writing on the pieces and it says in purple, (my favorite color.) “Will you marry me.”

I look at him and he gets down on his knees and gets out the ring and goes to slip it on my finger. I tell him to just shove it on, but then I say I haven’t said yes yet. Ganesh tells me the most beautiful things and asks me to marry him and I say…yes!!! (As if there was any doubt)

Would love to hear your engagement story.

Did it go as planned?

What was your favorite part?

What would you have wanted to change?

Looking forward to connecting with you!